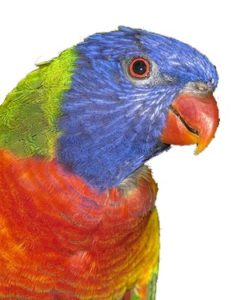 There are over 350 varities of parrot species found around the world. Macaws, Amazons, lorikeets, lovebirds, cockatoos and many others are all considered parrots. Though there is great diversity among these birds, there are similarities as well. All parrots have curved beaks and all are zygodactyls, meaning they have four toes on each foot, two pointing forward and two projecting backward. Most parrots eat fruit, flowers, buds, nuts, seeds, and some small creatures such as insects.

Parrots are found in warm climates all over most of the world. The greatest diversities exist in Australasia, Central America, and South America.

Many parrots are kept as pets, especially macaws, Amazon parrots, cockatiels, parakeets, and cockatoos. These birds have been popular companions throughout history because they are intelligent, charismatic, colorful, and musical. Some birds can imitate many nonavian sounds, including human speech. The male African gray parrot (Psittacus erithacus) is the most accomplished user of human speech in the animal world; this rain forest-dweller is an uncanny mimic.